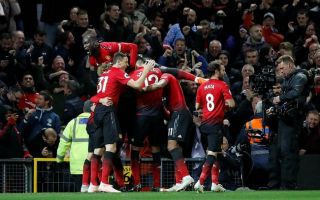 Just two Manchester United players are reported to have remained loyal and pledged their allegiance to Jose Mourinho right until the end of his time at Old Trafford.

The Portuguese tactician left United on Tuesday morning after two and a half years in charge of the Red Devils, with a 3-1 defeat to Liverpool at the weekend seemingly the last straw for the club.

According to the Daily Mirror, most United players felt they were not progressing under Mourinho and seemed to support a change, though it’s claimed Nemanja Matic and Romelu Lukaku are the two who stayed loyal to the former Chelsea boss.

Both played under Mourinho at Chelsea earlier in their careers, which may have played a part, but either way it was not enough for him to stay on.

Ole Gunnar Solskjaer is now expected to come in on a temporary basis, with one section of Man Utd’s official website appearing to confirm the news despite no official announcement being made at the time of writing.

UPDATE: The page referenced above is now displaying an error message, but some people on Twitter have kindly screen-grabbed the original story…

And here it is pic.twitter.com/X1JrFyA8ll