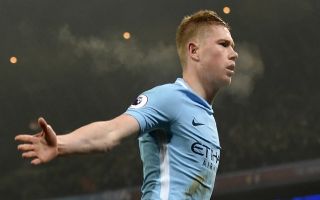 Manchester City midfielder Kevin De Bruyne fired his team into the lead against Leicester City on Tuesday night at the King Power Stadium.

Pep Guardiola’s side are hoping to earn a place in the semi-finals of the Carabao Cup this evening and have gotten off to a flyer against the Foxes, thanks to De Bruyne’s stunning 14th-minute strike.

The Belgian, starting his first game since November 1st, picked up the ball on the edge of the box and neatly sidestepped a defender with some great footwork before smashing the ball into the bottom right-hand corner.

City have enjoyed 78% possession in the first half and look as though they could brush Leicester aside over the next hour, especially with De Bruyne marking his return with a superb display in the middle of the park.

Check out his brilliant strike for City below, via Twitter.

He’s back with a bang, here is Kevin De Bruyne’s goal which made it 1-0 ?pic.twitter.com/aDJQGVBwyB