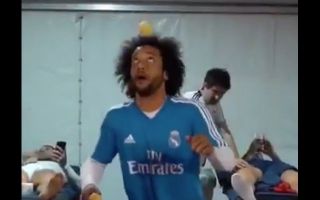 Real Madrid stalwart Marcelo has been known to showcase a touch of flair from time to time, and he’s been busy showing just how good his skills are.

The 30-year-old has been with the Spanish giants since 2006, making 466 appearances for them while winning a whole host of trophies including four La Liga titles and four Champions League trophies.

Having spent so long at the same club, it will undoubtedly be difficult for him and his teammates to keep things fresh and new in training, and clearly the Brazilian international enjoys showing off his skills to keep himself and his teammates entertained.

When you boast this level of close control and skill, it’s easy to see why Marcelo would want to show off, as he clearly is naturally gifted and has that Brazilian flair.

Whether it’s a football or a tennis ball, it seems as though it doesn’t make much of a difference for Marcelo when he’s having fun…