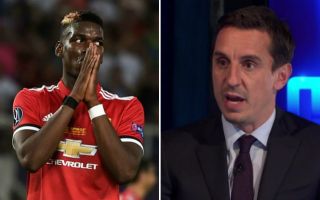 Paul Pogba caused quite a stir on Tuesday as he tweeted shortly after Jose Mourinho’s exit from Man Utd, and it seems Gary Neville wasn’t impressed.

As seen in the post below from Sky Sports, the Frenchman posted an image of himself smirking and asking his followers to caption the snap, albeit there is perhaps an argument to suggest that it was posted by mistake in advance prior to the news Mourinho had been sacked.

Further, it’s not clear whether he manages his own social media accounts himself or if it was posted by a member of his team.

Either way, it was poor timing and left Pogba open to criticism for seemingly being unprofessional, and clearly from Neville’s reaction below, he was not happy with it.

In his defence, the tweet was quickly deleted, but such is social media, eagle-eyed followers were able to screenshot it before it disappeared and Neville also spotted it and slammed Pogba for it.

Having struggled to consistently deliver under Mourinho, perhaps the ex-United manager’s exit will now give the World Cup winner a fresh start and allow him to start showcasing his full talent.

Time will tell if that happens, but given he has been benched for key games in recent weeks and has now received criticism for his social media activity in the wake of the Mourinho announcement, he may well have a few pundits, ex-players and fans to win over to prove that he’s got the right attitude and approach moving forward.

You do one as well !