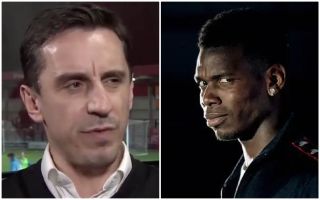 As confirmed in the club’s official statement on Tuesday morning, they opted to part company with the Portuguese tactician after a dismal start to the campaign.

SEE MORE: The first thing Paul Pogba did after finding out Jose Mourinho had been sacked by Manchester United

United continue to languish in sixth place in the Premier League table, 11 points adrift of the top four while sitting 19 points behind leaders Liverpool after their defeat to the Reds last weekend.

In turn, with no real consistent sign of things improving, Mourinho has ultimately paid the price. While he was undoubtedly at fault and has to take some of the responsibility and blame for Man Utd’s recent struggles, he wasn’t helped by his players.

Paul Pogba is undoubtedly the stand-out example of that, as the Frenchman has struggled to showcase his best form and quality on a consistent basis since returning to Old Trafford.

Coupled with countless reports of a tense relationship with Mourinho, most notably the clip of the pair during a training session earlier this season, he made headlines on Tuesday after tweeting out the post below shortly after news broke that the United boss had been sacked.

What do you make of Pogba’s reaction to Mourinho’s dismissal?

He deleted this tweet shortly after it was published.

Neville refuses to buy into excuses that perhaps it was a scheduled post from his team that they simply forgot to hold back after Mourinho’s sacking became apparent.

It seems as though United have an ongoing problem with the World Cup winner, but from their perspective, they’ll surely just be hoping that the interim boss and long-term appointment can get the best out of their record signing moving forward to help the club achieve their objectives.

Clearly though, question marks will remain over his attitude and approach if there was any intent behind the social media post.