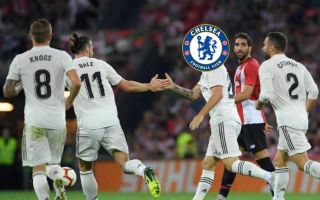 There’s exciting Chelsea transfer gossip coming out of Spain right now as it’s claimed Isco’s departure from Real Madrid could be sealed in a matter of days.

This could be a superb signing for the Blues if they pull it off, with Don Balon claiming they’ve made an offer and that Real president Florentino Perez is likely to accept it imminently.

The report states Chelsea could sign Isco for £72.3million, and that it would be ‘parallel’ to two other potential deals between the two clubs.

Don Balon link Eden Hazard with Real Madrid in their piece, while Mateo Kovacic’s future also remains up in the air as the Croatian is on loan at Chelsea from Madrid and it is unclear at the moment if he will remain in west London permanently.

Isco could arguably replace both players if they ended up leaving, with the Spain international capable of playing a creative midfield role or as a wide forward.

The 26-year-old has not featured as much for Los Blancos this season, having particularly fallen out of favour with Santiago Solari.

It could be fine business for Chelsea if they take advantage of this situation, with Isco looking ideal for Maurizio Sarri’s style of football.