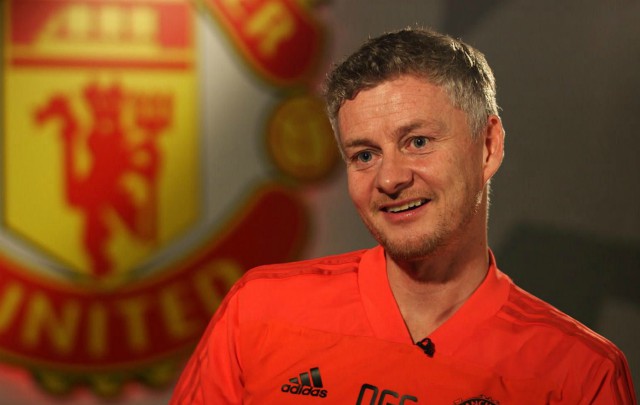 Manchester United fans will be excited to hear that Ole Gunnar Solskjaer feels like he is ‘coming home’ after being appointed the Red Devils’ caretaker manager.

Solskjaer’s first interview as caretaker boss was with MUTV and the Red Devils legend told fans that “I promise I’ll give everything I’ve got to get this club back to success.”

United have endured a dismal first half to the season, the Red Devils sit in sixth place in the Premier League – 19 points behind bitter rivals Liverpool and 11 points off Chelsea who round off the top four.

United’s disastrous start to the season could well leave them without Champions League football unless Solskjaer manages to pull off an incredible miracle during his sixth months in charge.

Check out Solskjaer’s interview with MUTV below:

Solskjaer was full of excitement when he talked of his homecoming to Old Trafford:

“It’s great. It feels like coming home. It’s been a few whirlwind days. It’s been very hectic. It’s great to see everyone again.”

Solskjaer was well aware of the fact that the United hierarchy have already got their search to find their next permanent manager underway, but the Norwegian was over the moon with the fact that he is taking the reigns at Old Trafford for time being:

“Well it’s six months. I’m going to enjoy the ride. I’m back home and it’s about seeing the players and seeing the staff and of course it’s about being myself”

“I know The club is running a process to find the next manager so I’m just going to be myself in the meantime with Mick (Phelan), Kieran (McKenna) and Michael (Carrick).

“We’ll get the players enjoying their football and I look forward to seeing the supporters again.”

Ole also gave his thoughts on how his appointment just before the hectic Christmas and New Year schedule will help him get to know all of his players:

“You certainly get to see the players in a game – in a pressure situation.”

Ole is also confident going into the busiest period of the year, Solskjaer believes United have an “amazing” squad:

“The amount of games coming up is no problem because we’ve got an amazing squad of players, who are all quality players and they’ll get a chance to show that they’re Man United players.

“We’re in a results business and we want to win games. That’s my job to help the players do. We want to see them play the football they can do.”

Ole believes the club have a great behind-the-scenes setup that will help them:

“We’ve got a great set-up. The analysts were watching Cardiff when I came in this morning. I watch the Premier League so I’ve seen all the teams and I’ve got a little bit of a review on them.

“It’s about us though, not the opposition. It’s about Man United. We want to see the players express themselves. Our main focus is on us, then we’ll give the team one or two details on the opposition.”

Solskjaer also talked about how this period will give him a chance to rotate the squad:

“We have to rotate so you’ll get to see many players. Everyone will get a chance. Whatever has happened before has happened and everyone starts with a clean slate.

“You’ve got to start somewhere. I’ve seen the last few games. You pick a team now and you move on. Everyone will get their chance.”

Solskjaer believes leading the team out at Old Trafford on Boxing Day will be ‘Special’:

A report from Mirror Football revealed the full transcript from Solskjaer’s first interview and fans will love that ‘Ole’ “can’t wait to get going” as United boss.

Ole has described that the chance to sit in the gaffer’s seat is “very special” to him:

“I’m proud of my career as a player. I understand this club, I know the club. Being in the gaffer’s seat is very special.”

“When I scored on my debut Eric (Cantona) was there and it was a brilliant feeling. You felt comfortable at Old Trafford and you want the players to feel at home there too.

Ole then spoke about just how much of an influence Sir Alex Ferguson has had on his managerial style:

“The boss [Ferguson] will always be the best at that. I get my managerial style from him. He’s been the biggest influence but then again we’re different. I’m a different personality.

“I like to speak to people, I like to engage with people, I want to see people express themselves. That makes me happy.”

Ole spoke of his respect for Michael Carrick and praised the fact that he “filled Roy Keane’s boots”:

“When he was signed I played with him for a season. I watched Michael evolve and develop.

“He was a top player for us and filled Roy Keane’s boots – and that’s not easy.

“I’ve been on the phone with him quite a few times and he’s been brilliant. I can’t wait to work with him.”

Ole is certainly all about fulfilling the club’s prestigious tradition, fans will be excited to hear that Solskjaer will not hesitate to give the chance to young players that are ready:

“Matt Busby said if you’re good enough you’re old enough and I want to maintain that. I watched the Chelsea game and I was really impressed.”

The fact that Solskjaer has quoted Matt Busby in his first interview just goes to show that United is in his blood.

Ole will also win the hearts of fans with his statement that David De Gea is the “best goalkeeper in the world”:

“We have the best goalkeeper in the world.

“He’s been there for eight years and he’s still a young goalkeeper developing. It’s fantastic for me to come in and have him. Maybe I’ll have to do some finishing training to keep him in check!”

Solskjaer has worked with some of United’s stars during his time as reserves team manager and Solskjaer reminisced about Jesse Lingard’s debut for the reserves:

“I gave him his debut in the reserves away at Burnley. Within two minutes that little tiny kid goes in for a 50/50 with a massive centre-back and the little kid absolutely clattered him.

“I thought ‘you have a chance!’

“He showed me he had something.”

Solskjaer also admitted that it’s “great’ to see where Marcus Rashford is now after watching the England international when he was younger:

“I watched him when he was younger. He was really young. I’ve followed him closely and it’s great to see him where he is now.”

Ole strongly believes that the group of players that he has at his disposal are all a “great set of lads and professional”:

“I’ve spoken to most of them today. It seems like a great set of lads, professional, wanting to do well and learn.

“I’ve spoken to Michael and Kieran about them all. I’ll take time getting to know them.”

Solskjaer admitted that “he didn’t have a clue about what was about to happen” in the past couple of days when he was watching the Champions League draw that has drawn the Red Devils with French giants PSG:

“I was watching the draw on Monday without a clue as to what was about to happen. PSG is a fantastic chance.

“Under the lights at Old Trafford. The manager [Ferguson] talked about those nights. Those are the nights that United come to the fore.

“I can’t wait for it. But we need to build a foundation in the games leading up to it. We can’t wait.”

Ole also spoke passionately about the DNA of the club, Solskjaer believes United are the “biggest club in the world, with the best supporters and best players”:

“The first thing I noticed was that it’s a family club. Everyone is so tight-knit.

Solskjaer ended with a message to the United faithful once again expressing his joy at being “back home”:

“It’s great to be back home.

“I promise I’ll give everything I’ve got to get this club back to success.

Solskjaer’s first match in charge of the Red Devils will be against his former club Cardiff on Saturday night. The Norwegian stepped down as Cardiff boss in September 2014 after only nine months in charge of the Bluebirds.