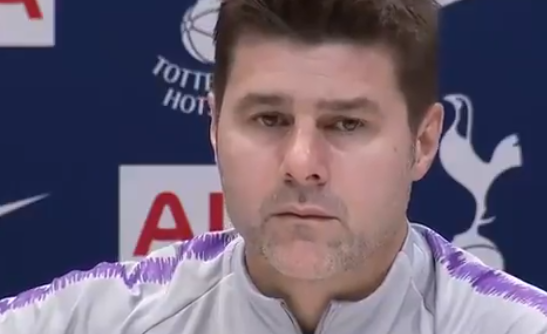 Watch this intriguing little video clip from Sky Sports below as Tottenham manager Mauricio Pochettino responded to speculation linking him with the Manchester United job.

The Argentine is one of the most impressive coaches in the game at the moment, and United have a vacancy for next season after Jose Mourinho’s exit this week, with Ole Gunnar Solskjaer coming in as interim boss until the summer.

Spurs were in no mood to discuss Pochettino’s potential move to United, and at one point their press chief called on the cameras to be switched off as one reporter would not stop asking about the rumour.

Pochettino played it cool throughout, barely saying anything, though he smiled at amusement at the whole spectacle – or is he just happy at the thought of rocking up at Old Trafford next season?

"We will not have another press conference dominated by Man Utd talk" @SkySportsNews reporter unable to ask Mauricio Pochettino about links to Manchester United job.