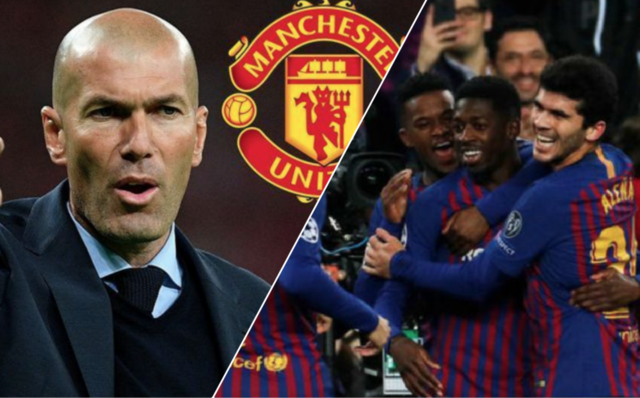 Barcelona and France star Ousmane Dembele has seemingly given a boost to Manchester United, after it was noted that the winger had prioritized an offer to join Zinedine Zidane at Old Trafford.

This is according to Don Balon, who note that the 21-year-old looks set to leave the club in the summer, and that he’s already singled out the club he’s to move to next.

The report also states that Dembele ‘prioritizes’ Zidane’s offer to move to Man United with him, with it also being stated that the 3-time Champions League winning boss has a deal on the table from the Red Devils to see him become their new manager.

This news will come as a big boost for United, as it seems like they could’ve been handed a golden chance to sign one of the world’s most promising stars just as long as they appoint Zidane as manager in the summer.

Dembele seems to have finally found his feet with the Blaugrana if the player’s recent displays are anything to go by, something that looked like it may not happen given how he started his career with Barca last season.

The French international struggled dearly to adapt to life in Spanish football following his move fom Borussia Dortmund in 2017, with injuries and inconsistent first team minutes only hampering his start to life at the Nou Camp.

However despite this, Dembele finally looks to have turned his career with the Spanish giants around, but if this report from Don Balon is anything to go by, it doesn’t look like Barca fans are going to be able to watch the Frenchman play for their side for much longer.

The report from the Spanish news outlet states that Dembele’s departure from the Spanish giants could end up costing United around €100M, a more-than-reasonable price to pay for a player with his natural ability and potential.

Only time will tell us if Dembele ends up moving to United, something that looks very likely following this report from Don Balon.

Barcelona will bench £135.5m forward if he attempts to force 2022 free transfer with United and Juventus linked