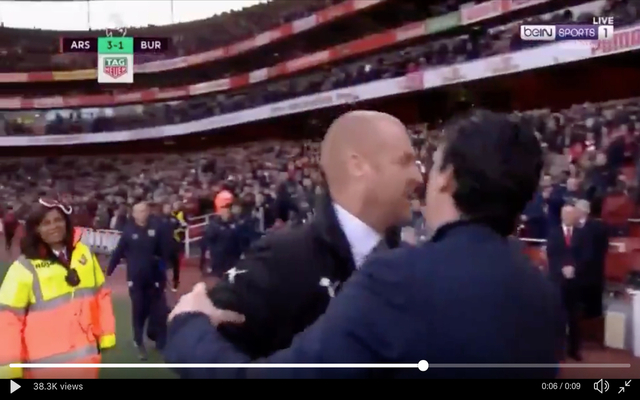 Arsenal boss Unai Emery clashed with Burnley manager Sean Dyche once the final whistle blew to seal Arsenal’s 3-1 win over the Clarets, there were certainly some words exchanged by the pair.

The Gunners certainly stunned Burnley this afternoon, the side’s transformation since Emery took charge was on full display.

Players such as Sead Kolasinac, Sokratis and Granit Xhaka showed that the Gunners no longer lack ‘bottle’ or ‘fight’ at the Emirates Stadium.

This afternoon’s clash was a fierce encounter but Arsenal stood up to the test. In recent years the Gunners would have crumbled from the strong challenges and pressure they’d faced this afternoon.

Check out the video of the pair clashing at full-time below:

Emery’s men now sit in 5th place in the Premier League, the Gunners have an outside chance of qualifying for the Champions League if they can maintain their pressure on Chelsea.