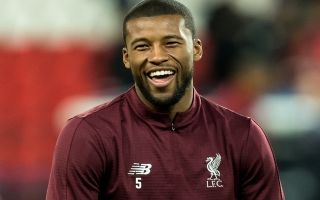 Crystal Palace’s Patrick van Aanholt has called for his Netherlands international teammate Georginio Wijnaldum to send the Eagles a bottle of wine after their shock win against Manchester City.

Roy Hodgson’s men managed to comeback from a goal down to defeat the reigning Premier League champions 3-2 at the Etihad on Saturday afternoon.

Going a goal down seemed to wake the Eagles up as they scored two goals in just two minutes – including a Goal of the Season contender from Andros Townsend, to take a shock lead against Pep Guardiola’s men.

Check out Wijnaldum and Van Aanholt’s hilarious exchange on Twitter below:

Wijnaldum replied to Aanholt’s post with the Dutch phrase ‘Lekker hoor’ which means ‘nice job’ when translated to English.

Aanholt took this opportunity to let Liverpool fan favourite Wijnaldum know that he should Palace a bottle of win after their shock win handed the Reds a boost in the title race:

Bro you owe the boys a bottle of wine, red or white we are not fussed ? https://t.co/1PlwkMPDRB

Jurgen Klopp’s men now have a four point lead over City. The Reds are the only team possible that can prevent Guardiola from dominating English football this season.

Should City win the league, Guardiola will be recognised for achieving a similar dominance with City than he did with Barcelona – the Spaniard created a dynasty during his time as Barcelona boss.