The Red Devils are currently sixth in the Premier League, eight points behind Chelsea in fourth and an astounding 19 behind Liverpool at the top of the table, after just 18 matches of the 2018-19 campaign.

The final few months of Mourinho’s reign at Old Trafford were miserable, to say the least, and the team seems to have completely lost its identity during that period, struggling to produce fluid, attacking football while conceding far too many goals at the back.

Solskjaer was drafted in to replace the Portuguese until the end of the season and he now has the unenviable task of galvanising a group which has lost all confidence.

He got off to a flyer in his first game in charge, securing a 5-1 win at Cardiff City which highlighted the fact that this United team is still full of quality and perhaps wasn’t giving everything to the cause during the last few months of Mourinho’s tenure, for whatever reason.

The Christmas period will end with two more important games against Bournemouth and Newcastle, which gives the new United manager ample opportunity to assess his new squad, before potentially bringing in some new faces in January.

Mourinho had complained during the summer that due to the club’s lack of investment prior to the new season they would struggle to compete with their rivals at the top of the table. His prediction turned out to be correct and although he pushed the self-destruct button spectacularly, it is obvious that the team could do with a few fresh reinforcements.

United have been linked with a wide range of players over the last few months, but after shipping 30 league goals this term – already two more than they conceded during the entire previous campaign – defensive targets will surely be a priority for Solskjaer.

CaughtOffside has compiled a list of five possible in-comings for the Red Devils during the new year, including a Premier League trio which could completely change the make-up of the current squad.

The English defender is currently enjoying another strong season with the Foxes, having decided to remain at the King Power Stadium during the summer despite an approach from Manchester United.

The Red Devils are set to return with a new offer for Maguire in January, according to the Daily Mirror, who report that Paddy Power are now offering 6/1 odds on the 25-year-old centre-back making a switch to Old Trafford, which is a huge drop on the original 9/4 price.

Maguire shone for England during the 2018 World Cup, playing a vital role in the heart of the defence as Gareth Southgate’s men reached the semi-finals of the competition in Russia.

The Leicester star is a strong, imposing figure at the back with a great ability to read the game and as he approaches the prime years of his career he will likely only get better, especially if makes the step up to a bigger club.

There is no greater challenge than Manchester United and he could slot into the current starting XI seamlessly, but it remains to be seen whether or not he will leave the Foxes at the mid-way point of the campaign.

Next up is a centre-forward who has stood out in a mediocre Hammers team ever since he arrived at the London Stadium in 2017 from Stoke City – Austrian target man Arnautovic.

The 29-year-old hit 11 goals in 31 games for West Ham last year and is already on course to beat that tally this term, having found the net 5 times in 13 appearances.

Leading the line for a side whose realistic ambition for the year is to secure a top-half finish isn’t easy, but Arnautovic is always a threat, pushing away defenders with his imposing strength and stature, while also bringing others in to play and showing off a keen eye for goal whenever the opportunity presents itself in the final third.

The Daily Mirror reports that he is one of the favourites to secure an Old Trafford switch in January and at the moment he could replace the out-of-form Romelu Lukaku in the starting XI quite easily.

At the very least he would provide Solskjaer with an extra option in attack and he might work well through the middle in a front-three, feeding off service from the likes of Rashford, Martial and Lingard.

The second man on the list to have already turned down Man United’s advances this year is Alderweireld, who has been a rock at the back for Spurs during the first half of the season.

The Belgian defender is one of the most consistent defenders in the Premier League and he has managed to forge strong partnerships with both Jan Vertonghen and Davinson Sanchez during his time with the Lilywhites.

Tottenham are currently third in the Premier League and still going strong in the pursuit of several trophies as the club bids to end a decade-long trophy drought next year.

At the moment Mauricio Pochettino’s men are a class above the Red Devils, but should Alderweireld opt for a move to Manchester in the winter transfer window – as the Daily Mirror suggests he might – the whole complexion of Tottenham’s starting XI could change.

United will aim to secure the 29-year-old’s defender next month and according to The Guardian, Pochettino could join him at Old Trafford at the end of the season, which might have a huge bearing on his final decision.

According to The Sun, Man United recently sent scouts over to Italy to watch Koulibaly in action ahead of a possible £90 million January bid for the defensive commander.

The Red Devils have been consistently linked with the Senegalese star over the last few months and Mourinho had been hellbent on bringing him in during the winter window, but Napoli may end up demanding a much larger fee for their most prized asset.

The 27-year-old signed a new five-year contract with the Serie A side back in September and since then his stock has only risen, with a number of top European clubs also keeping a close eye on his progress.

United remain the front-runners to lure him away from Naples and should Solskjaer manage to pull off a deal for the centre-back it would represent a huge coup for the club and perhaps signal their return to the big leagues in terms of high-profile transfers.

Koulibaly is widely considered to be one of the best defenders in Europe right now and he certainly has the quality and experience to add a whole new dimension to United’s current line-up.

Fifth on the list is the most recent target Man United have identified, Juve’s mercurial right-winger Douglas Costa, who has once again featured prominently for the Bianconeri this season.

According to Metro Sport, Red Devils chief executive Ed Woodward revealed his desire to bring in the Brazilian as soon as Mourinho was sacked at Old Trafford, with a view to adding a new attacking verve to the team.

Metro reports that Juventus signed Costa permanently in the summer for £36million from Bayern Munich, but he has yet to register a single goal or assist in Serie A since.

Despite his lack of form in Italy recently, the 28-year-old’s quality remains undeniable and should he indeed end up moving to United next year the club would be gaining a unique player capable of running defences ragged and creating chances out of nothing.

Costa could thrive under Solskjaer, who is hoping to bring entertaining football back to the Theatre of Dreams and at the moment there is definitely a need for a natural right-side player in the squad, with Lingard and Rashford often deployed on that side during Mourinho’s reign with underwhelming results. 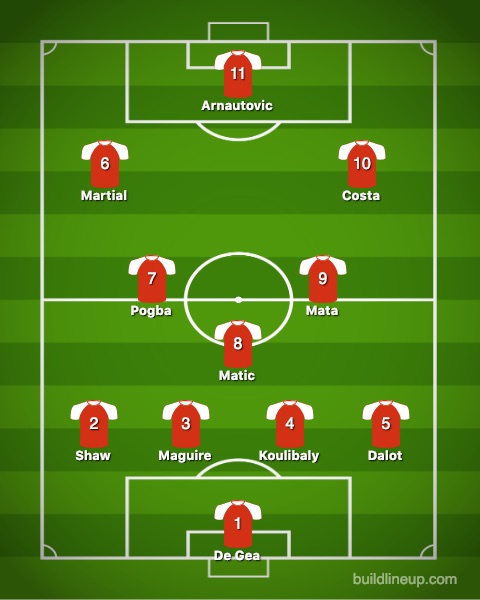