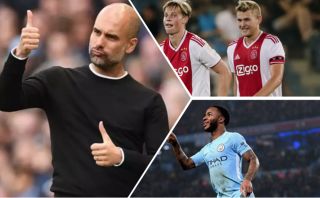 As expected, Manchester City have been absolutely brilliant so far this season, as Pep Guardiola’s side look to be taking the fine form they displayed last season into this campaign.

Albeit not as impressive as last year, City still look like an absolute machine so far this term, with the reigning Premier League champions still going strong on all fronts.

2nd in the Premier League, into the semi finals of the League Cup and into the knockout stages of the Champions League, City fans couldn’t have asked for much more from their side so far this season.

Although City seem to have lost a bit of ground to Liverpool in the race for the title, as well as struggling to get over the line in their Champions League group, Guardiola’s side can go into the new year with their heads held high following their displays so far this year.

So, for now, scroll down to read our summary of the best and worst that City have had to offer this season, as well as our thoughts in Pep Guardiola and one transfer target the club must focus on getting in in the January window.

Raheem Sterling has been absolutely brilliant for Pep Guardiola’s side so far this season, as the England international has proven to fans everywhere that he truly is the real deal, and not the flop some have been describing him as in recent times.

The 23-year-old has already scored 10 and assisted nine all competitions this term, an incredible return for a player who’s made to play out wide more often than not.

Special mentions to David Silva, Bernardo Silva and Sergio Aguero, all of whom have, as well as Sterling, been in great form this season.

However given the impact Sterling has on this City side, combined with his goals and assists numbers, we simply had to pick the England star for this one.

We’re going to have to give this one to either Ederson or Kyle Walker, neither of whom have been able to replicate the form they showed for City last year this time round.

Ederson has struggled to keep a clean sheet for Guardiola’s side this year as well as giving away two penalties, whilst Walker has been a shadow of his form self this term.

However, given his recent performance against Chelsea, as well as the fact that Ederson can’t really do much when the defence in front of him is allowing loads of chances to be created, we’ll have to give this one to Walker, although only just…

If there’s one position in Man City’s squad that definitely need bolstering, it’s defensive midfield, as currently, the club only really have Fernandinho as a stellar option to pick from in that area.

The Brazilian has been left out of City’s last two games against both Leicester City and Crystal Palace in the League Cup and Premier League respectively, with Guardiola’s side failing to win either of these in normal time. Coincidence? We think not…

If City are to push for the quadruple this season, they’re going to need a good back-up option for Fernandinho in defensive midfield, and they may have found the perfect man for the job on Ajax’s Frenkie De Jong.

As per the Mirror, Man City were set to agree a £66.8M move for for the 21-year-old earlier this month, implying that this is how much the player is worth, however the club have since put that move on ice, something that left manager Guardiola outraged.

City may have made a mistake by doing this though, as shelving the deal could very well allow other teams to get ahead of them in the race for the player, something that could see them lose out on signing the Dutchman.

And that’s something that Man City simply cannot afford to do if they want to go all the way in all four major competitions this season.

Let’s be honest, unless something absolutely ridiculous happens, Spaniard Pep Guardiola will almost certainly be in charge of Man City come next season, whether they win any silverware this season or not.

The former Barcelona boss had done an exceptional job since taking over at the Eithad in the summer of 2016, with the 47-year-old completely revamping City’s squad and turning them into one of the most feared sides in world football.

City still look in great shape to win at least one trophy this term given the fact that they were drawn with Burton Albion in the semi finals of the League Cup, a fixture that basically assures them of a place in the final (no offence, Burton fans).

If City were to get rid of Guardiola any time soon, they’d be shooting themselves in the foot massively, especially when you realistically consider how many managers out there are better than the Spaniard.

It’d be very surprising to see City end the season without any silverware this term, and we wouldn’t be shocked to see the club win at least two come May.

City may have a little catching up to do to Liverpool in the race for the Premier League, and they may have to overcome some of Europe’s best clubs in order to claim their first ever Champions League title, but if any side in the world can, it’s Pep Guardiola’s.

City winning the quadruple would be a huge accomplishment, however given their current squad and the finances they have at their disposal, we wouldn’t put it past them becoming the first side ever to achieve the feat come the end of the season…