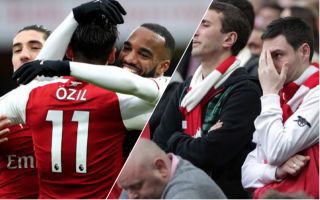 Arsenal fans took to social media to absolutely berate Mesut Ozil for his performance in his side’s 1-1 draw with Brightin at the AMEX Stadium this evening.

Unai Emery’s side dropped even more points on Saturday evening, as they only managed to draw 1-1 with Brighton, a result that will disappoint fans seeing as the Gunners were 1-0 up in the tie.

A goal from Pierre-Emerick Aubameyang gave the north London side the perfect start, however a strike from Jurgen Locadia saw the home side level the scores.

The result now means that Arsenal have dropped five points from their last three league games, something that has seen them lose ground in the race for the top four.

There were a number of Gunners stars who didn’t have the best games of their careers against Brighton today, however the most obvious one had to be German international Ozil.

Ozil failed to provide any significant threat to the Seagulls’ defence in the match, with Emery eventually deciding to take the former Real Madrid man off at half time.

The German’s display didn’t go unnoticed, as during and after the match, a vast array of fans took to Twitter to slate the midfielder for his performance.

You can check out a few select tweets regarding this below.

Given how he played in that first half, we can see where these fans are coming from…

Ozil was terrible and left his man for the goal.

Ozil has been terrible again, need to give him a 6 week break so he can drop a masterclass against a bottom half side

Ozil has been terrible.. hiding all over the pitch.. get rid ??

Ozil is terrible absolutely useless, kind of surprised he didn't pull out with a "back ache". He'll be mysteriously injured for the Liverpool match.

Poor bloke, he was hooked at half time too. Absolutely useless today, Mesut Ozil.

Ozil is totally useless…did not run at all today..
Never tracks back .. the sooner he is gone the better…nothing good will come with ozil..u can't have a player waiting to make 1 good pass in 90 mts

Ozil was totally useless..so was Xhaka and Torreira today

Mate, Ozil was so useless today he got subbed off at the half.