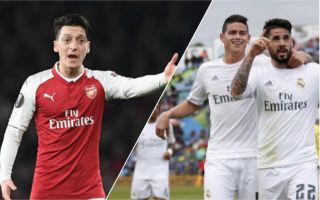 Arsenal are reportedly ‘very interested’ in sealing a deal to bring Colombia and Real Madrid midfielder James Rodriguez to the club.

This is according to Don Balon, who are noting that the Gunners are keen on signing the 27-year-old, with it also being stated that player himself would ‘welcome’ the idea of sealing a move to the north London club.

Don Balon’s report also states that Unai Emery is keen on signing Rodriguez as a replacement for Mesut Ozil, and that Colombian international’s price tag stands at €60M.

Signing Rodriguez may become something of a priority of the Gunners, especially when you realise that Aaron Ramsey and Mesut Ozil could both be departing the Emirates in the near future.

The Colombian midfielder has shown during his stints with both Bayern and Real Madrid that he, on his day, is one the best attacking midfielders on the planet, something the Gunners could definitely do with should they lose Ozil.

Rodriguez has scored 47 and assisted 56 in 161 appearances for Real and Bayern combined, a total that more than proves the player is capable of performing at the peak of European football.

If Ozil does decide to leave, we really wouldn’t be shocked at all to see the Gunners make a move for Rodriguez, especially if this report from Don Balon is anything to go off.