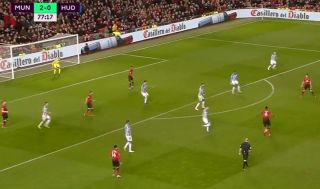 Manchester United star Paul Pogba has scored his second and his side’s third of the game against Huddersfield Town in today’s Boxing Day clash in the Premier League.

The France international looks a far happier player after the departure of Jose Mourinho, with the 25-year-old now on two goals and three assists since the Portuguese was sacked last week.

Watch Pogba’s latest effort in the goal clip below, as he nonchalantly guides the ball home from outside the box.

It’s a classy effort from a classy player, who is finally now being given the license to play his game after being shackled by Mourinho for far too long!