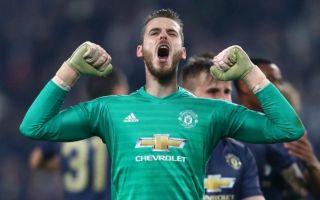 The Spain international was on top form as usual for the Red Devils, keeping out what looked to be a certain goal in the second half with an incredible stretch and strong hand to keep the shot out.

Solskjaer knows a good save when he sees one, having played in some legendary United teams alongside goalkeeping greats like Peter Schmeichel and Edwin van der Sar, but he showed just how highly he rates De Gea by praising his save today as probably the best he’s seen.

Solskjær on De Gea: “That save is one of the best I’ve seen, probably the best.” #mulive [mutv]

United must now surely do all they can to get De Gea tied down to a new contract, with the 28-year-old’s current deal only running until the end of next season.

Many of the world’s biggest clubs will surely be queuing up if something cannot be agreed soon, especially if De Gea keeps on pulling off incredible saves for the cameras as he did today.