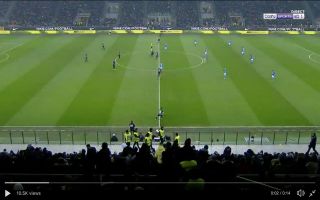 Chelsea target and Inter Milan star Mauro Icardi surprised fans with what he did to kick-off Inter’s Serie A clash against Napoli earlier today.

The Argentine is renowned for his fiery personality but no one could ever have imagined that the talisman would do this during a game.

The 25-year-old showed that he is fearless by audaciously attempting to score directly from kick-off. The forward’s bizarre attempt happened to startle the Napoli goalkeeper and his effort rattled the crossbar.

Icardi is one of the most prolific strikers in the world and according to the Express, the Blues are eyeing a January move for the frontman given that they need to bolster their attack due to the poor form of both Olivier Giroud and Alvaro Morata.

Check out Icardi’s speculative effort below:

This Chelsea fans certainly wants the Blues to pay the big bucks to land the Argentine star:

C'mon Chelsea. Icardi hit the bar straight from kick off in the Inter game.

So is nobody gonna say anything about Icardi hitting the cross bar from kickoff or…?

Goodness me Icardi hit the bar from kick off ??

Icardi almost scored football's fastest ever goal. Straight from kick off, hit it direct to Napoli's goal, forcing the GK to block it on the line. That's inside 2 secs.

Icardi's got some balls to shoot the ball right from Kick Off. ?