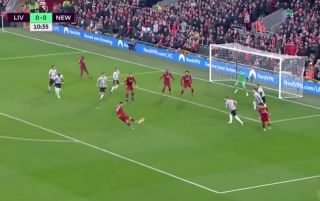 Dejan Lovren scored a fine half-volley for Liverpool this afternoon to hand Jurgen Klopp’s side the lead vs Newcastle at Anfield.

Rafa Benitez’s side were dominant in the early proceedings at Anfield, however it was Lovren’s fine strike that eventually broke the deadlock early in the first half.

A ball in from Andy Robertson was headed away by the Newcastle defence, however the ball fell to Lovren, who fired a stunning half-volley into the back of the net to hand Liverpool a dream start.

The goal can be seen below. Great finish from the Croatian!

WHAT A GOAL LOVREN pic.twitter.com/axlmiPtCbn