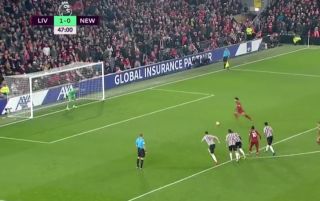 Mohamed Salah bagged his 12th league goal of the season this afternoon, as he cooly and calmly slotted a penalty home to give Liverpool a 2-0 lead vs Newcastle at Anfield.

The Reds were already 1-0 up going into the second half following a fine opener from Dejan Lovren, and Salah put the home side into a commanding position following his spot kick early in the second half.

Jurgen Klopp’s side were awarded the penalty after Paul Dummett fouled Salah, as the winger then stepped up to the spot kick himself, calmly placing the ball into the back of the net.

You can check out Salah’s goal below. Quality composure from the forward!

Liverpool are 2-0 up as Salah scores from the spot, but was it a penalty?