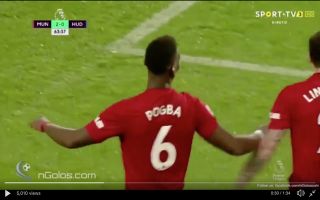 The Frenchman was clearly still in the Christmas spirit when he pulled out a wonderful dance after scoring his first of the day, Pogba showed he’s back to his normal self after enduring a tough relationship with former United boss Jose Mourinho by sealing his dance routine with a trademark ‘dab’.

Check out the video of Pogba’s celebration below:

Check out some fan reaction to Pogba’s dancing;

Mourinho would bench him For this

But I thought Pogba was gonna have a stinker after dancing all day yesterday. ?

Lmao bare men were out here monitoring every Pogba move, questioning him on everything when Mourinho was here. Telling him to stop having haircuts and dancing.

My man danced all through yesterday and still delivered a masterclass today. Smh.

Got to love Pogba honestly ????

So he should, what a game from the lad

Pogba has silenced his critics who yesterday called him out for enjoying his Christmas by dancing with arch-rivals Manchester City’s Benjamin Mendy. The midfielder also celebrated Christmas with his fellow countryman and Everton centre-back Kurt Zouma.

Lolll I love Pogba and he’s so cute inviting Zouma to celebrate bc he’s probs alone in Merseyside. Plus Mendy loves to dance. Party at Pogba’s House. ? https://t.co/RntgEgjjbm