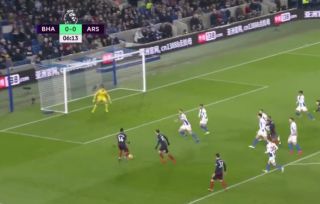 Pierre-Emerick Aubameyang scored his 13th league goal of the season this afternoon to hand Arsenal the lead vs Brighton, but the strike only came after some fine work from Alexandre Lacazette in the build-up.

The Gabon international bagged his 13 Premier League goal of the campaign, as he fired the ball into the top corner to leave Brighton ‘keeper Matt Ryan with no chance.

However, the goal was all about the work Lacazette did in the build-up, as the Frenchman’s relentless pressing and genius play to sell three defenders before setting up Aubabemeyang was a joy to behold.

You can catch the goal below. Fantastic assist from Lacazette, and what a finish from Aubameyang!

Aubameyang curls his shot past Ryan to give Arsenal at early lead at the Amex.