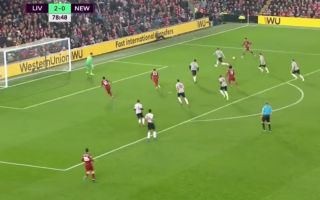 Xherdan Shaqiri put the icing on the cake for Liverpool this afternoon as he tapped home from close range to hand the Reds a 3-0 lead against Newcastle at Anfield.

The home side were already two goals to the good thanks to Mohamed Salah and Dejan Lovren, with Shaqiri tapping home late in the second half to wrap up the win for Jurgen Klopp’s side.

The goal came after some slick passing from Liverpool lead to Trent Alexander-Arnold getting in down the right, as he played the ball across the box for Shaqiri to finish.

You can check out the goal below. Lovely, slick move from the Reds!

What a play for Shaqiri’s goal. Simple as that! pic.twitter.com/BdAVYQJyo9

‘Has Shaqiri been locked back away?’ – These Liverpool fans confused by omission of the Swiss v Arsenal October 1, 2020 19:26
Liverpool FC