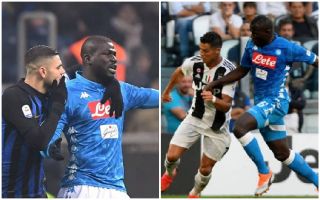 Juventus superstar Cristiano Ronaldo offered a show of public support for Kalidou Koulibaly after the Napoli ace was subjected to racist abuse.

The 27-year-old was sent off in his side’s 1-0 defeat to Inter on Wednesday night, but not before there was audible abuse coming from the stands from the home supporters.

As noted by the Guardian, Koulibaly took to Twitter to hit back after the game, while Napoli boss Carlo Ancelotti insisted that he will lead his team off the pitch if it happens again after referee Paolo Mazzoleni failed to take any action despite three warnings being issued.

Such abuse has absolutely no place in football at any level, and so it has come as no surprise that Koulibaly has received plenty of support while the minority guilty of targeting him have received widespread condemnation.

Ronaldo has also spoken publicly about the matter, as seen in his Instagram post below. The 33-year-old posted an image of him going up against Koulibaly in a clash from earlier this season, with the caption below.

“In the world and in football It will always take education and respect. No to racism and any offence and discrimination!!!”

It’s a classy move from the Juventus man, and hopefully given his reach online it will lead to a bigger audience and wider conversation taking place so that such incidents aren’t repeated. If it does happen again, the officials must surely do more rather than the clubs taking matters into their own hands.

Video: Cristiano Ronaldo fools 4 Genoa players with tricks to create chance that led to winner for Juventus from debutant Hamza Rafia vs Genoa