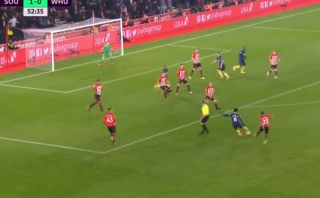 West Ham winger Felipe Anderson is having a pretty good night, having scored a stunning quickfire double against Southampton.

The Hammers were 1-0 down at the St Mary’s Stadium before their Brazilian star turned on the style with two well-taken goals to give the visitors a 2-1 lead.

You can watch Anderson’s brilliant brace below, with the former Lazio man showing that he can cut it in the Premier League after finally making the move to England this summer.

The 25-year-old had been linked with some bigger Premier League clubs in the past, and it’s now mainly Liverpool fans who seem to be crying out for a bid for him after his heroics this evening…

That guy ANDERSON again, sign him up @LFC in January

Felipé Anderson is absolute quality. Too good to be playing for West Ham. City or Liverpool should be looking at him.https://t.co/Jth54ezflV