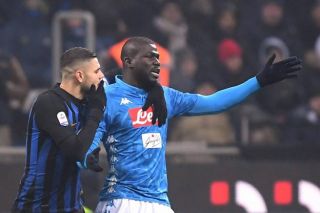 Napoli defender Kalidou Koulibaly took to Twitter on Wednesday night as he responded to being subjected to vile racist abuse during the defeat to Inter.

The 27-year-old had been playing a key role as the Partenopei looked set to return to Naples with at least a point. However, he was sent off late on after picking up two yellow cards in quick succession.

Question marks could be raised over his dismissal as it seemed harsh, albeit he did sarcastically applaud the referee, but evidently his frustration was also caused by other factors, namely the racist chants coming from the stands.

The Senegal international reacted after the game as he hit back at those who aimed the abuse at him.

“I’m disappointed by the defeat, but above all at leaving my brothers,” Koulibaly later wrote on Twitter, as seen below. “But I am proud of the colour of my skin. Proud to be French, Senegalese, Neapolitan: a man.”

Meanwhile, Napoli boss Carlo Ancelotti issued a warning if his defensive ace should experience a similar issue while also slamming referee Paolo Mazzoleni for not taking further action given several warnings to the fans were ignored.

“Koulibaly was certainly irritable. Usually, he is very calm and professional, but he was subjected to monkey noises throughout the game,” Ancelotti said, as per the Guardian.

“We asked three times for some action to be taken, but the match continued. We keep being told play can be halted, but when? After four or five announcements? Maybe we have to take matters into our own hands next time and stop play ourselves. They’ll probably make us lose the game if we walk off, but we are prepared to do it. It’s not good for Italian football, seeing this.”

Ultimately, it’s a disgrace to even be talking about such a situation presenting itself. Nevertheless, Ancelotti is right to have questioned the way in which it was handled, and in the interests of his player moving forward, it appears as though Napoli are ready to take notable action if it happens again and the officials fail to handle it themselves.

It was a bitterly disappointing night for Napoli as they failed to take advantage of Juventus slipping up at Atalanta, but rightly so, the focus is on the abuse aimed at Koulibaly which will hopefully bring action moving forward.