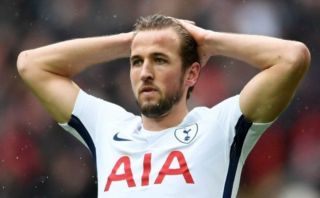 Harry Kane may have scored an absolute thunderbolt for Spurs in their clash vs Wolves this afternoon, however the England international had a game, and moment, to forget for the north London side.

Kane had given Spurs the lead midway through the first half with a fantastic strike from outside the box, however three goals in the last 20 minutes from Wolves turned the game on its head, as Mauricio Pochettino’s side ended 2018 with defeat.

Goals from Wily Boly, Helder Costa and Raul Jimenez saw Wolves walk away from Wembley with all three points on Saturday afternoon, as Tottenham suffered a shock defeat, losing further ground in the race for the title as a result.

Kane didn’t exactly have his best game in a Spurs shirt despite finding the back of net, with some fans becoming enraged with the forward in the second half after he was booked for diving.

As the 25-year-old cut in from the right, he fell the floor despite their being no clear contact from Wolves’ defender, something that saw the player cautioned by the referee.

And this moment from Kane was something that fans were not pleased with at all, with some even taking to Twitter to lambast the striker for his theatrics at Wembley on Saturday.

We’ve picked out a selection of these tweets which you can find below.

Not Kane’s best moment, we must admit…

Harry Kane is such a disgrace ffs

I would take that OBE off Kane….what a disgrace for diving

Kane dived such a disgrace

Kane is an absolute disgrace, worst diver I've ever seen in football easily

Harry Kane MBE booked for diving. Disgrace to the empire.

HARRY KANE IS A CHEAT

havent seen Kane this desperate to make an impact since he killed his brother Abel . Diving really? pic.twitter.com/YiauP7Npbz

Loool there was loads of attention for Salah diving, expecting the same energy for Kane now. pic.twitter.com/WUQCFBkVlE