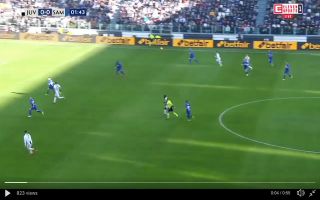 Cristiano Ronaldo got Juventus off to a flying start in their Serie A clash against Sampdoria this morning, the superstar gave the ‘Old Lady’ the lead less than two minutes into the game.

Ronaldo has Paulo Dybala to thank for firing the ‘Old Lady’ into the lead so early into the tie. The Argentinian launched an inch-perfect pass across the pitch to Ronaldo before he beat a Sampdoria defender and fired a shot towards goal from just inside the box.

Juventus are already running away with Serie A. Max Allegri’s side have a nine-point lead over Napoli in second and it looks as though no one is going to stop Ronaldo from winning Serie A in his debut season.

What a start for Juve ?

A wonderful ball from Paulo Dybala and then Cristiano Ronaldo with the finish ? pic.twitter.com/i6SUcaF6pn