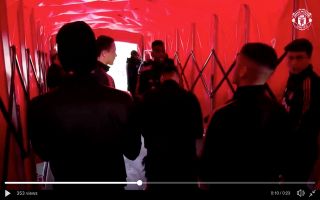 Manchester United star Paul Pogba rallied his teammates with a passionate speech before the Red Devils’ impressive 3-1 win against Huddersfield on Boxing Day.

Pogba’s speech certainly seemed to do the trick, the Red Devils dispatched Huddersfield with ease and Pogba was in sensational form. The Frenchman scored a brace in en route to United’s 3-1 victory, Pogba looks like a completely transformed player under the tutelage of Ole Gunnar Solskjaer.

Solskjaer has given Pogba the licence to play in a much more advanced role in midfield – during Jose Mourinho’s reign as United boss Pogba struggled to prove his price-tag because of Mourinho’s defensive style of play and use of Pogba in a deeper midfield role.

“When we go we go, pressing first ones! Now we’re at home. we go strong we start strong!”

Paul Pogba leading the team out with words of inspiration. My captain. ?? #mufc [MU] pic.twitter.com/BJomwV2d5f

United are in sixth place in the league but with fixtures against Bournemouth and Newcastle coming up the Red Devils could edge closer to the top four by the end of the busy Christmas and New Year period.