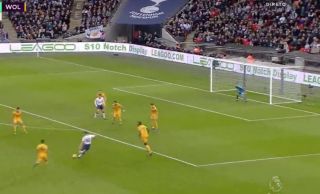 Harry Kane pulled an absolute thunderbolt out of the bag this afternoon as he gave Spurs the lead in their clash vs Wolves with a brilliant effort.

With the score tied at 0-0 midway through the first half, Kane showed why he’s one of the best goal scorers in world football as he cut in from the right before firing his left-footed attempt straight into the top corner.

The strike was an absolute joy to watch, and it’s one that currently puts the north London side just three points league leaders Liverpool in the Premier League table.

What a goal! KANE ? #THFC pic.twitter.com/HCBTbvwkFe