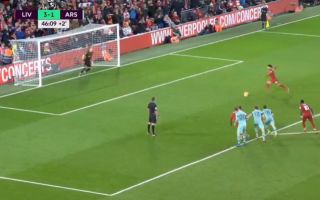 Mohamed Salah scored an emphatic spot-kick to put Liverpool 4-1 up vs Arsenal at Anfield in the Premier League this evening.

Having already been 3-1 up thanks to goals from Roberto Firmino and Sadio Mane, the home side scored a fourth just before the interval through Salah.

The Egyptian was fouled in the box by Sokratis, with Salah then stepping up the penalty just seconds later, hammering the ball home to give his side a three-goal advantage.

You can check out Salah’s spot kick below. What a first half from Jurgen Klopp’s side!