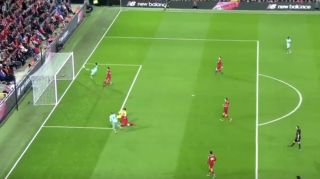 Pierre-Emerick Aubameyang would’ve been more than happy to see the offside flag go up in this moment against Liverpool this evening, as the Arsenal forward was saved from being made to claim the miss of the season.

Being 4-1 down to the Reds in the second half, a ball across the Liverpool box found Aubameyang just yards from goal, however the Gabon international failed to convert the chance as he skied the ball from almost underneath the cross bar.

The offside flag was eventually raised by the lineman, a sight we’re sure the forward was delighted to see given the embarrassing nature of his miss!

You can check out Aubameyang’s miss below. It seemed easier to score!

And it’s aubameyang 2 yards out and he missed it ????? pic.twitter.com/zY2McAeicT

Never seen a miss like it since Ronny Rosenthal used to miss for Liverpool & Spurs#LIVARS pic.twitter.com/x7MStcxqKT