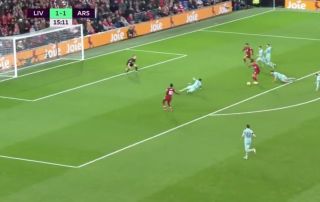 Roberto Firmino scored twice in 90 seconds for Liverpool this evening to hand his side a 2-1 lead vs Arsenal at Anfield.

The Gunners were originally 1-0 up thanks to a goal from Ainsley Maitland-Niles, however two quick-fire goals from Firmino saw the Reds turn the game on it’s head.

The Brazilian’s first saw him score yet another no-look goal after the ball kindly fell to him in the area, with the forward’s second seeing him twist and turn through the Arsenal backline before firing home with his left.

It was a fine 90 seconds from Firmino and Liverpool, as Jurgen Klopp’s side look to keep up their fine start to the season this evening.

You can catch both goals below. What a turnaround on Merseyside!

90 – There were exactly 90 seconds between Roberto Firmino's first and second goals for Liverpool against Arsenal. Quickfire. #LIVARS