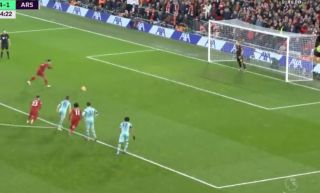 Roberto Firmino bagged a hat-trick against Arsenal this evening, with the Brazilian’s third coming after he cooly slotted home from the penalty spot.

The Brazilian scored twice in two minutes in the first half to turn the game on its head, and the forward wrapped up his hat-trick in the second half from the penalty spot.

The spot-kick was given after Dejan Lovren was fouled by Sead Kolasinac, with Firmino stepping up and calmly placing the ball home to make it 5-1 to the Reds.

You can check out Firmino’s penalty below. Unstoppable from the Brazilian!

Firmino completes his hat-trick with a penalty.