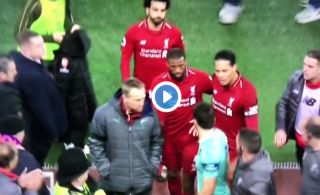 Virgil Van Dijk was praised by a number of fans for seemingly sticking up for Mohamed Salah at half time of Liverpool’s 5-1 win vs Arsenal at Anfield.

The Reds went into the break 4-1 up thanks to goals from Sadio Mane, Roberto Firmino (x2) and Salah himself, with the Egyptian being confronted by Arsenal ace Sokratis for the manner of his goal.

Salah scored his goal from the penalty spot after winning the spot-kick just seconds early after he was fouled by the Gunners star, something Sokratis clearly wasn’t best pleased with given his reaction when realising the penalty had been given.

Sokratis seemed to confront Salah as the players were walking back to the dressing rooms, with Van Dijk, and a number of other stars, coming over to stand up for Salah.

This reaction from Van Dijk was loved by fans, who took to Twitter to praise the Dutchman for his actions.

Van Dijk calling out Sokratis at half time, what a man and lesder. 7-1 final score line… Allez Allez Allez #YNWA

Van Dijk would absolutely batter the hell out of Sokratis

Sokratis needs a big slap off van Dijk for abusing our Mo… How on earth he thought he didn’t give that penalty…. Fucking twat!

Seeing Van Dijk step in at the tunnel amid the snapping of Sokratis was really classy. Leadership ?

Loved that from Van Dijk though down the tunnel, gotta send on Keita 2nd half to snap Sokratis

Van Dijk would thump this sokratis fool, don’t try it with my captain

Van Dijk ??
Sokratis chewing salahs ear off about the penalty
big Virg’ flying over, pushes him away and then chases him down the tunnel ????

Van Dijk down the tunnel after Sokratis defending his teammates is class, the man literally can do no wrong?

Shithouse Sokratis having a go at Salah all the way into the tunnel. Captain Van Dijk comes in and helps out his mate, as does captain Hendo from the bench. I love this team.

I actually love this from Virgil van Dijk, what an absolute machine. #LFC pic.twitter.com/uWZCU9Fhes