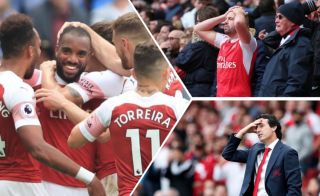 Arsenal midfielder Lucas Torreira was absolutely hammered by a number of fans following his less-than impressive first half against Liverpool this evening.

Despite going 1-0 up against the Reds, Unai Emery’s side ended up going into half time 4-1 down, with goals from Sadio Mane, Mohamed Salah and Roberto Firmino (x2) putting the Gunners to the sword.

Arsenal’s first half performance was their worst so far this season, and one player in particular seems to have caught the eye of a select number of fans for his shoddy display this evening.

Torreira, who has largely bene excellent since his move to the Gunners from Sampdoria in the summer, had a very poor first half, with the Uruguayan constantly being run ragged by Liverpool’s attack and midfield.

The 26-year-old was left flat on his backside when Firmino scored his and Liverpool’s second of the game, a goal that we’re sure the midfielder won’t be wanting to watch back anytime soon.

Fans took to Twitter to berate Torreira for his 1st half performance this evening, one that was debatably the player’s worst in an Arsenal shirt thus far.

Torreira has been shocking wow

Torreira has been shocking

Torreira has been uncharacteristically awful

Weird thing is Torreira has been awful too.

Torreira has had a pretty awful game so far…

I love Torreira but he has been poor. Was at fault for a goal too.