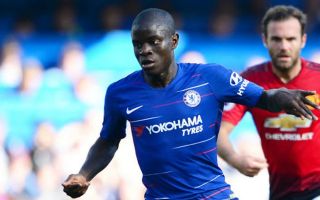 It’s not hard to see that Maurizio Sarri has made a difference to Chelsea’s team since replacing Antonio Conte as the club’s manager in the summer.

The Blues started the season in fine fashion, going unbeaten in their first 12 Premier League outings, well as qualifying for the semi finals of the League Cup and making it to the knockout rounds of the Europa League.

Chelsea’s play style has also improved, as they now look to dominate games from start to finish under Sarri, something that’s a bit of a change from the counter-attacking style the club deployed under Conte.

And the buck doesn’t stop there with Sarri. The Italian has also managed to improve the games of a number of the club’s top stars, one of which is N’Golo Kante.

Kante has been a fantastic signing for Chelsea ever since his arrival from Leicester in the summer of 2016, and it seems like he’s managed to take his game to the next level under Sarri if this stat is anything to go by.

As seen above, Kante has managed to achieve his best goal return for a league season already this term, and considering the player had only managed three goals in his previous 106 Premier League outings before this year, it’s clear to see Sarri’s arrival has positively benefited the midfielder’s game.

Kante has been made to play further up the pitch for the west London side since Sarri’s arrival, something that the Blues seem to be reaping the rewards from if this stat is anything to go by.

It’ll be interesting to see how many goals Kante ends up with come the end of the season, and given how he’s faired already, we can guarantee there’ll be more goal scoring exploits to come from the Frenchman this year.

Cesc Fabregas admits popular Chelsea star has a dark side