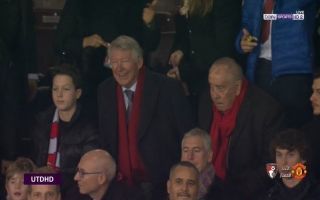 Manchester United continued their excellent run of form under Ole Gunnar Solskjaer with a 4-1 victory over Bournemouth, one thing that fans couldn’t help but love was Sir Alex Ferguson’s reaction to win.

The Red Devils look like a completely transformed side under Solskjaer, the likes of Paul Pogba and Marcus Rashford are not just playing some of the best football they have this season – but some of the best they’ve played in their entire United careers.

Ferguson is a regular at Old Trafford but the Scotsman hasn’t had much to smile about this season given the side’s woes under Jose Mourinho but it seems that things are on the up at United under Solskjaer.

There’s no doubt that Fergie loves the job that his protege Solskjaer is doing so far, just look at his smile…

Ferguson was all smiles after United’s impressive win against the Cherries:

Fergie today compared to the last time we seen him! pic.twitter.com/9eWFLJhlkY

The United faithful loved seeing a smile on Ferguson’s face after such a disappointing start to season:

Best thing about today was seeing that smile on Fergie's face #mufc https://t.co/srWhvEpMso

Good to see Fergie smile again! OGS must be doing something right at OT.

He’s playing the Alex Ferguson system. You can see it in Sir Alex’s smile

Fergie legit chuffed for the team!????

Fergie walking out so happy with pogba and mufc game

Could Solskjaer defy the odds and lead United to Champions League qualification?