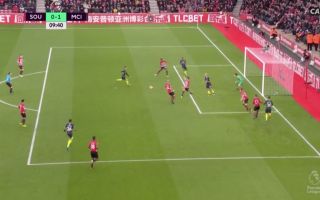 David Silva scored a simple tap-in to hand Man City a 1-0 lead vs Southampton at St Mary’s, a goal that come courtesy of some fine play from Bernardo Silva.

Having played a one-two with Riyad Mahrez, Bernardo Silva continued into the box unchallenged, taking the ball to the byline before cutting it back to David Silva, who applied the finish to hand Pep Guardiola’s side the lead.

It was a fine team goal from City, who will absolutely need to win today to stand any chance of catching Liverpool in the title race.

You can catch Silva’s goal below. Great play from Bernardo in the build-up, there!

Here's David Silva's goal which made it 1-0 to City.???#SOUMCI #MCFC pic.twitter.com/fyIh8qgbRA