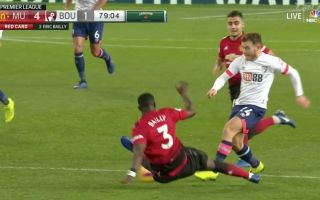 Manchester United centre-back Eric Bailly was shown a straight red card by the referee in the 78th minute of United’s clash against Bournemouth for a reckless challenge.

United fans will be racking their brains to figure what came over Eric Bailly in the 78th minute of today’s clash, the centre-back abandoned his post to rush forward and put in a shocking tackle on Bournemouth star Ryan Fraser.

Bailly will now miss United’s next three games against Newcastle, Reading and Tottenham as a result of his actions. Ole Gunnar Solskjaer has transformed United’s attack and midfield but his defence still look out of their depth.

Check out the sending off below:

It’s surprising to see Bailly playing with fire by making such a reckless challenge only 10 minutes after he was fortunate to not give away a penalty for a high challenge on Charlie Daniels.

Should Bournemouth have had a penalty for this challenge from Eric Bailly? Jamie Carragher thinks so.

Bailly’s decision is nothing short of stupid, with the Red Devils leading 4-1 there was absolutely no need for the Ivorian to make this kind of challenge.