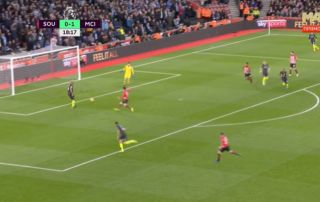 Manchester City almost scored a serious ‘Goal of the Season’ contender against Southampton at St Mary’s this afternoon.

Having already been 1-0 up thanks to a goal from David Silva, the away side very nearly made it 2-0 midway through the first half following some very risky build-up play from their defence.

The ball was carelessly knocked between all of Ederson, Vincent Kompany and Oleksandr Zinchenko, with the ball eventually ending up with winger Riyad Mahrez, whose effort skimmed past the post at the other end.

The goal would’ve been one of the best we’re to see this season had it gone it. If only Mahrez had passed it to Sterling instead of going for glory…

If that went in ? #mancity ?? pic.twitter.com/pMEs6layuu

@ManCity building confidently from the back… beautiful soccer that leads to a brilliant opportunity. #ManCity @premierleague pic.twitter.com/MXyBarPaXt

Video: ‘Look where the f***ing line is’ – Kevin de Bruyne launches furious rant at linesman during Man City vs Spurs