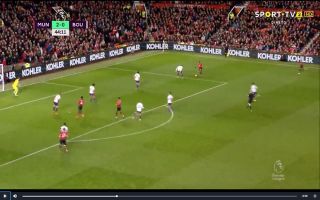 Manchester United attacker Marcus Rashford scored his second of the day against Bournemouth on the stoke of halftime, finishing off a wonderful team move by the Red Devils.

In the 45th minute of the match, one-time United misfit Nemanja Matic launched a beautiful ball over the top of the Bournemouth defence into Anthony Martial.

Martial raised the bar set by Matic by directing an insane outside of the foot cross into Rashford who dived forward to poke the ball into the back of the net to extend United’s lead.

Check out Rashford’s goal below:

The Red Devils are blowing teams away since Ole Gunnar Solskjaer took charge as caretaker boss and it looks like the Norwegian could defy the odds by leading United to a top four finish.