Arsenal manager Unai Emery has been fined £8,000 by the FA after admitting a charge of improper conduct in relation to kicking a water bottle towards a Brighton fan.

During the Gunners’ draw with Brighton on Boxing Day at the AMEX Stadium, Emery got frustrated and kicked a water bottle into the crowd which hit a Brighton fan.

The Spaniard apologised to the fan who had been hit by the bottle after the match, Emery thought this would be the end of the matter and he wouldn’t face any punishment for his actions.

Here’s what Emery had to say on the incident in quotes obtained from BBC Sport:

“I said to them I’m sorry,” Emery said after the game.

“It wasn’t hard but it touched one supporter.”

“I kicked the bottle in frustration but not at the supporters, not with this intention. It’s circumstances. I apologised. I hope it’s the end of the matter, yes,” 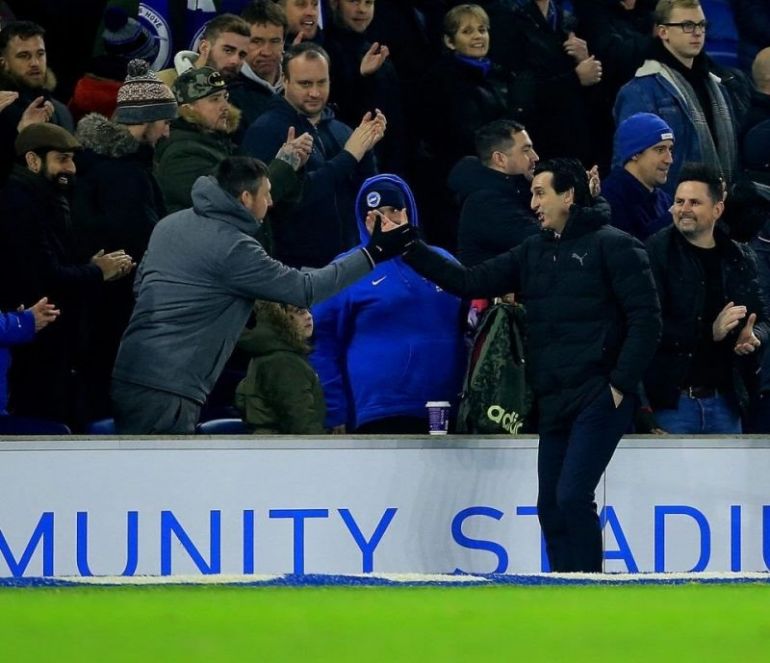 Emery apologising to the Brighton fan.

Emery’s punishment has sparked a debate over the FA’s decision not to charge Mohamed Salah for what appeared to be a clear dive against Newcastle last week and for also failing to charge Sadio Mane with violent conduct after he strangled Arsenal defender Stephan Lichsteiner on Saturday evening.

Here’s some reaction to Emery’s punishment:

FA is a joke

Embarrassing that liverpool get nothing for 3 weeks in a row

PL & FA should concentrate their fines on diving and cheating. Emre didnt aim bottle at fan just off target like most of his players

Unai apologised many times… yet the FA still take that money? Surely if your going to fine the man then the victim of the bottle should receive that money… not the FA!

He admitted his mistake…he apologised to the fan…the fan accepted the apology….Unai apologised again after the game.

Absolutely no reason to sanction him for this. Football is an emotional game, things happen in the spur of the moment. Embarrassing from the FA as usual.

Wise up. What about the numerous doves that liverpool players have carried out in previous matches. The way Mane acted towards Lichtsteiner. Not a thing done towards them, Liverpool…..

Yet Mane gets away with trying to strangle someone????

And mane gets nothing for strangling liechsteiner and salah for diving 2 weeks in a row? Consistency at its best there

For kicking a bottle yet a fan chucks a banana at a player and gets £500 fine ?

These Premier League fans are certainly disappointed at the lack of consistency that the FA seem to be showing to acts of misconduct.