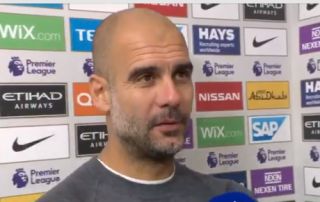 Man City host Liverpool on Thursday night in what could be a potentially decisive meeting in the Premier League title race.

Although they bounced back against Southampton on Sunday, City fell to back-to-back defeats to Crystal Palace and Leicester City over Christmas which was a disaster for their title hopes.

With Liverpool remaining unbeaten and looking in ominous form, City slipped seven points adrift of their title rivals ahead of their showdown this week.

In turn, while there is still a long way to go in the campaign with 18 games remaining, it’s easy to understand where Guardiola is coming from when insisting that his team must win at the Etihad or concede the title.

“With the position of Liverpool, if we drop points then it is over, it is finished; it would be almost impossible,” he said, as quoted by Sky Sports.

“Of course they are going to drop points but not too many. If you want to be there as far as possible until the end we have to remember what happened last season, and this as well, apart from the last few days.

“Maybe I’m wrong but all players everywhere want to do well. Sometimes you need to realise that wanting to do well is not enough. You have to try it again.”

On one hand, there is still a crucial part of the season to come with question marks still to be answered by Liverpool over how they react to the pressure when the business end of the year comes round.

Further, both teams are still involved in the Champions League and FA Cup, and so that could also have an impact on their league form.

As a result, perhaps Guardiola is simply playing mind games and trying to motivate his players so that they understand the magnitude of the fixture.

Inflicting a first defeat of the season on Liverpool to close the gap at the top of the table would certainly shake things up and ask questions of Jurgen Klopp and his players and perhaps shift the pressure onto them despite their lead.