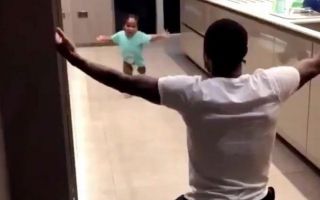 If his son’s technique wasn’t enough, the fact that he’s named Thiago confirms that he’s destined to become a future star.

If this is Thiago at just a year old it will be frightening to see how his skills develop as he gets older, there’s going to be a lot of parents bamboozled by his talents when he scores for fun in youth teams.

better first touch than lukaku and better finisher than morata.

someone said he has a better right foot than morata

Thiago Sterling ? Raheem’s kid is gonna be the best #10. The name is to elite

Chelsea are interested in signing one year old Thiago Sterling for £50m on a 15 year deal after the toddler was filmed striking a better shot than Morata.

He will be loaned out to Vitesse Arnhem for 15 seasons…

Thiago Sterling is the future. https://t.co/stBhsKtrjd

It looks as though Thiago is destined to follow in his father’s footsteps.