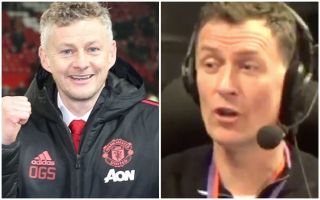 Man Utd have made a very impressive start under interim boss Ole Gunnar Solskjaer, but it seems this fan may be getting a little too optimistic.

The Red Devils have won all three games since the Norwegian tactician replaced Jose Mourinho on a temporary basis, with his side scoring 12 goals and conceding three.

Solskjaer has brought back the attacking brand of football that was seen during the Sir Alex Ferguson era, and it has certainly lifted the mood at Old Trafford as they set their sights on cutting the gap to the top four in the Premier League.

As seen in the video below though, one Man Utd fan is clearly loving what she is seeing right now and makes some very valid points about the change at the club since Solskjaer was appointed. However, she has perhaps gone a little too far by suggesting that the club are back on the right path to competing for trebles again in the coming years.

Given United have beaten Cardiff City, Huddersfield and Bournemouth, they’ve had a pretty favourable run of fixtures since Solskjaer came in.

In turn, it will be interesting to see how he deals with tougher tests this season, with a trip to Newcastle United on Wednesday night likely to be a tricky affair along with a trip to Tottenham on January 13.

It’s arguably fair to suggest that he now has United in a position to really compete for a top four finish this season. However, to claim that they could be going for a treble in the next two years seems overly optimistic, and that is reflected in the reaction and comments that the video has received…