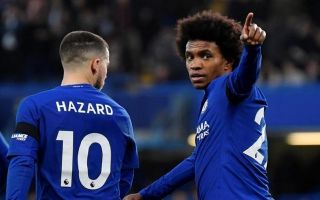 Chelsea forward Eden Hazard reportedly already has a verbal agreement on a transfer to Real Madrid, though the two clubs are not yet negotiating a deal together.

The Blues attacker will be out of contract at the end of next season, meaning it is little surprise to see talk of him moving on from Stamford Bridge.

The latest from Don Balon is that he has a deal of sorts with Real Madrid, though it remains to be seen if or when Chelsea will agree to let the Belgian go.

Hazard is one of a number of big-name attacking targets for Los Blancos, who are also looking at Paris Saint-Germain duo Kylian Mbappe and Neymar as they bid to replace Cristiano Ronaldo.

Real have struggled since selling the Portuguese goal machine to Juventus in the summer, with players like Gareth Bale not really stepping up since then.

Madrid have a history of signing ‘Galacticos’ – the biggest names in world football, and a new front three including the likes of Hazard and one of Mbappe or Neymar would truly be something special.