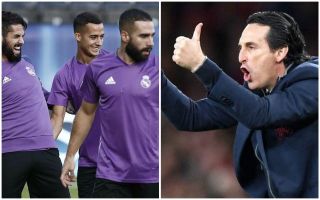 Arsenal could reportedly get a major boost in their pursuit of Isco with reports that Chelsea have pulled out of a potential transfer of the Real Madrid star.

The Spain international is attracting plenty of interest at the moment after struggling to get as much playing time at the Bernabeu this season.

While it remains to be seen if Arsenal can compete with other European giants, they now seem to have one less rival in the form of Chelsea.

This is because the Blues have made a u-turn on a potential £75million deal for Isco due to his excessive wage demands, with the feeling that the player was more motivated by money than anything else in terms of a prospective switch to Stamford Bridge, according to the Sun.

The 26-year-old is perhaps most likely now to make the move to Paris Saint-Germain, according to the Sun, but it surely gives Arsenal some hope.

Isco looks set to leave Real Madrid, with Chelsea pulling out of a transfer handing a potential boost to Arsenal and PSG

Spanish outlet Diario Gol recently suggested the Gunners were stepping up their interest in Isco, while the Independent claimed the club could try a swap deal for him that would include Mesut Ozil.

Given Ozil has fallen out of favour with Unai Emery in recent times, it makes sense for the club to look for a ready-made replacement like Isco would be.