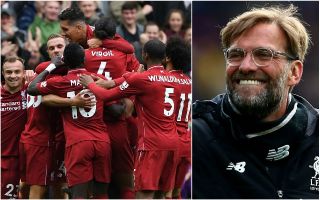 Liverpool can more or less wrap up the Premier League title with a point against Manchester City in their Premier League clash at the Etihad Stadium this week, according to Paul Merson.

The Reds are currently seven points clear at the top of the table, though that can obviously be cut to just a four-point lead if City win this crucial title race six-pointer on Thursday night.

Still, Jurgen Klopp’s men look the team to beat at the moment, producing some fantastic football as they did last season, but with an added discipline at the back thanks to quality signings like Virgil van Dijk and Alisson.

Merson believes anything other than a City win this week means Liverpool will be unstoppable in their pursuit of the title this term – which is certainly a bold claim.

The former Arsenal man does not see LFC losing three games between now and May to allow Pep Guardiola’s reigning champions back into it.

And while that makes sense given their record so far, with the club still unbeaten 20 games into the season, Liverpool have not won the title for 29 years, which is bound to put a different kind of pressure on their players, as it did when they came agonisingly close to ending that drought in 2013/14.

‘If Liverpool don’t lose at Man City, then that rules City out of the title race,’ Merson told Sky Sports.

‘They will be seven points behind if they draw that. Liverpool are unbeaten, and would have to lose three matches before the end of the season – no chance.’