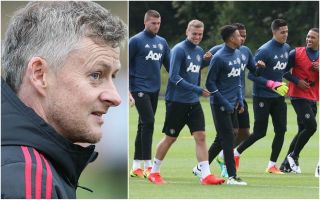 Manchester United’s interim manager Ole Gunnar Solskjaer has had another of the club’s youngsters from the academy train with the senior side this week.

According to the Manchester Evening News, RoShaun Williams is the latest Red Devils prodigy to get a chance to impress under Solskjaer, who seems committed to maintaining that United tradition of raising players up from within.

The Norwegian tactician notably worked with United’s youth teams earlier in his coaching career, and has given opportunities to the likes of Angel Gomes and James Garner since replacing Jose Mourinho last month.

Williams, 20, is the latest to be involved, though the MEN do stress that he’s not looking likely to make a matchday squad just yet.

Still, fans will be delighted at Solskjaer’s willingness to trust youth – something his predecessor Jose Mourinho was not exactly renowned for.

Solskjaer spoke recently about United’s traditions in that respect, strongly hinting that he would make it a big part of his time in charge.

‘Everybody connected with the club knows we are dependent on youngsters coming through, and to make them good enough they’ve got to have a chance,’ he told the club’s official site.

‘If you don’t give them a chance, you can suspect “he might do it, he might do it”, but they’ve got to be able to show their talent.’